Jobsbridge And Me A Jobseekers Experience 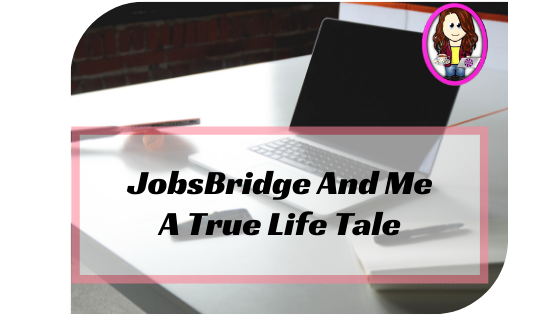 Jobsbridge has been in the news again, and finally the scheme is being reviewed and changes made.

This is my experience of being on the scheme

At the end of 2010 I returned to Ireland after working in UK. I returned to a country I did not recognise and found myself like so many others unemployed. In 2011 I decided to upskill and did a Pitman Secretarial Diploma and in 2012 a Digital Marketing Diploma while unemployed, paid for out of my savings.  At the end of 2012 I started looking for a Jobsbridge Digital Marketing Internship.  This scheme was supposed to be for people like me, long term unemployed as a way to get back to employment.

WOW how wrong I was.  Almost every Jobsbridge internship looked for a degree qualification.  Week after week, month after month I applied for so many internships. Some never even replied back, some I actually made it to the interview stage.  I was told I had the skills but I needed a degree. I was told I had the skills but they needed experience. Some Jobsbridge internship positions even had multiple rounds of interviews!  It was hard to believe that I was being interviewed for an intern position that that was not even on the payroll! It felt more like the interview process for management level jobs.

As the months went by I started to notice a pattern.  The same companies were advertising intern positions every few months.  Companies would advertise a 6 month intern position, then after 6 months, the intern would be let go and the position advertised again on the Jobsbridge  website.

Everyone knew the system was being abused. I spoke to a few people working in my local social welfare office and they acknowledged that companies were abusing the scheme. These were front line employees dealing day in day out with unemployed people who just had to follow what they were being told to do by the Department.

The companies loved the scheme. They got a staff member without any of the financial or legal responsibilities.  They could put across the image that they were a caring company, giving the poor unemployed person some training and experience.  Give each other a pat on the back, look how good we are to the unemployed, doing our bit to get the country back on its feet.

No one ever thought about the unemployed person, what it would feel like to know that you are doing the exact same role as a paid employee, often having a desk beside a paid employee.  The paid employee could be earning over €300 per week, with company and legal benefits. The Jobsbridge intern would be earning €188 Jobseekers allowance plus €50 Jobsbridge supplement, and have no company or legal benefits.  No one ever questioned how this would affect the unemployed person’s self-confidence, moral, mental and emotional health and well-being.

It was all about how the Government could say they are reducing the unemployment figures, ticking boxes,  oh look aren’t we great.

I was lucky in the end. I could see exactly what was going on and I made sure I was not broken by the scheme.  So many did not have the same drive and motivation as I did. I’m sure that many are still unemployed, caught in the vicious cycle with no way out.